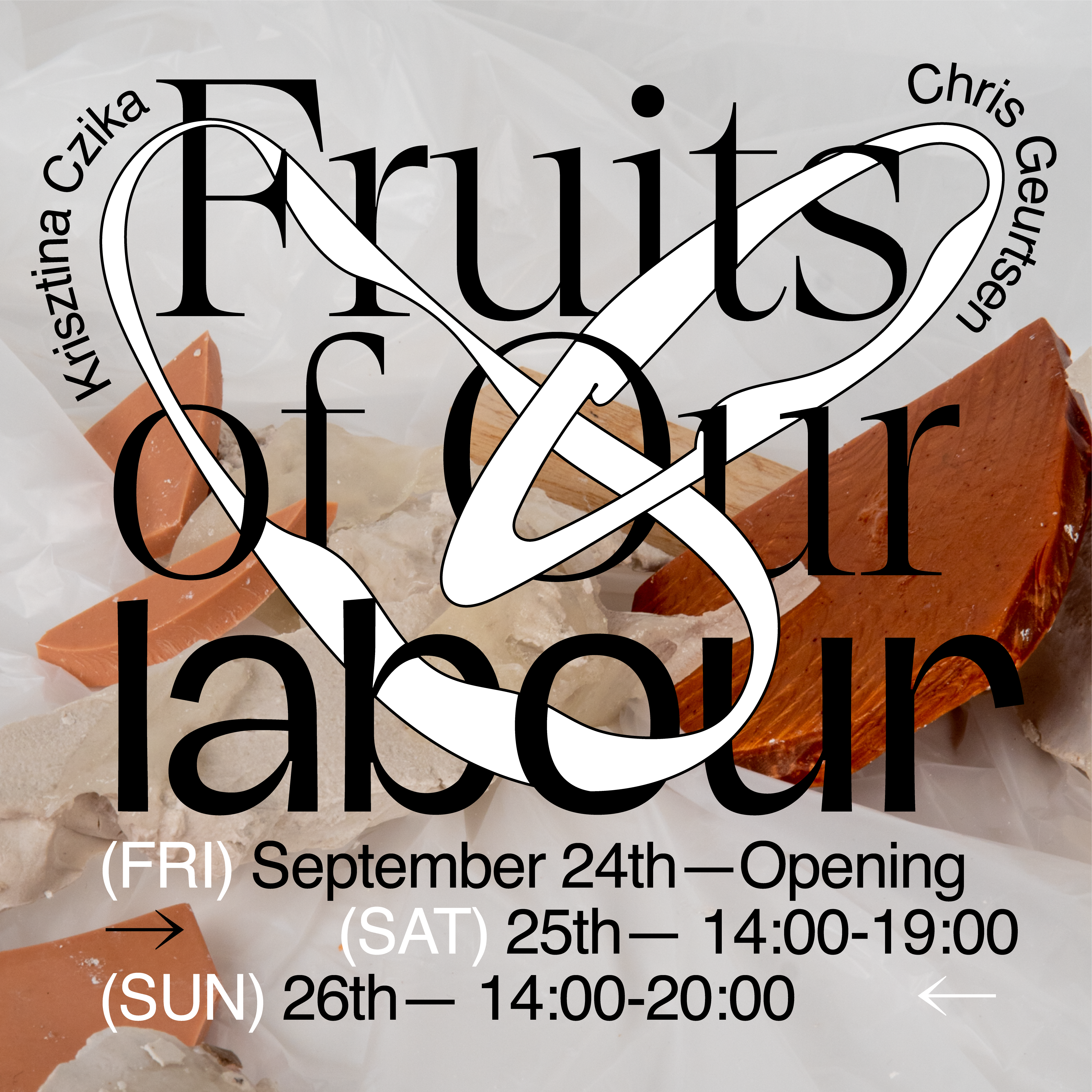 ‘Fruits of our Labour’

Fruits of our Labour.

‘Fruits of our Labour’ wants to break open the closed doors of the art organisations, offering a different perspective on hierarchical and normalised systems regarding internships. What initially started off as a research question between artist Krisztina Czika and her intern Chris Geursten, developed into a concept, and has now resulted in a physical exhibition.

Throughout the course of the internship program Czika and Geursten explored personalizing the experience and making it beneficial for both the art student as well as the studio. By identifying each other’s needs and specific areas of growth, Geursten was able to further develop an array of qualities, such as curating and developing artworks with other artists, and Czika further strengthened her role as mentor.

The exhibition will present both independent artworks and research surrounding the experiences of an internship from both sides (intern and mentor from an organisation/studio). By showcasing two independent installations interwoven due to a fruitful collaboration, the show is able to discuss the backbone of why it was even taking place at all.

The space provided by the Embassy of Art will be used to spark debate surrounding the current landscape around internships in art institutions and will explore how all parties can benefit equally from an internship program in a way that is not necessarily based on money and cash value.

Julika Lomas, community moderator and design therapist (@designtherapy – design coaching for startups and founders), will be guiding the debate by hosting both a workshop “design your own internship” as well as a panel talk with Czika and Geursten.

“as we fall into sequence”

With Geurtsen’s installation named ‘as we fall into sequence’, the artist aims to enlighten its spectators on some developments currently accelerating in the scientific world as well as the posthuman movement by touching on various topics such as brainwave observation, gene-editing technology and cyborgism. Creating a speculative body of work in the height of the anthropocene, Geurtsen aims to raise critical questions on bioengineering and brain-invasive tech. Pulling inspiration from the process of metamorphosis wherein a caterpillar essentially digests itself in order to morph into their next stage of life, similarly the sculpture will resemble the state of (re)becoming.

A project made and developed by Geursten, guided by Czika.

Czika’s sculpture ‘The Death of Venus’ is a new take on the historical Venus artworks like Venus of Willendorf and ‘The Birth of Venus’ by Sandro Boticelli. Her graduation projects ‘L’Antre de l’Intimités’ and ‘The Cave of Privacy’ and her recent research regarding women’s beauty standards, the beauty industry and cosmetic wax waste is now concluding in one installation. Czika has revisited her early research to reflect on the changes that happened in the past four years. It does not take long for a culture to switch certain perspectives, except when it comes to body hair or a critical view on the beauty industry and the waste it produces.

A sculpture made by Czika, developed with help of Geurtsen.